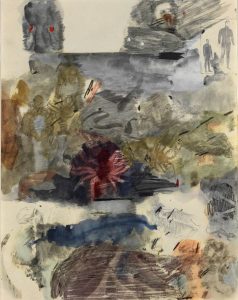 Robert RAUSCHENBERG (Port Arthur, USA, 1925-Captiva Island, USA, 2008)
Robert Rauschenberg made his XXXIV Drawings for Dante’s Inferno based on a milestone of medieval literature, The Divine Comedy by Dante, and gave it a new meaning more in keeping with his time. Between 1958 and 1960, he illustrated thirty-four chants from Hell, one of the three parts of this fourteenth-century epic, with images he found in magazines of the time such as Life and Sports, making collages with them, which were then transferred to paper. Once assembled, the images found were surrounded by new contexts and their appearance deformed by the juxtaposition of components, the pictorial manipulation, the enlarged frame and the pressure applied during the transfer process.
Appropriation, assembly and deformation were the keys to these Dantesque compositions, full of public figures that were common in American magazines and newspapers, whose behaviours Rauschenberg put in the spotlight aiming at suggesting a critical reflection on the society and politics of the time.