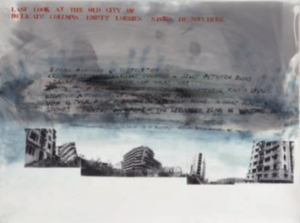 In the Old City of Beyruth. November 18-28th is one of the works Frank carried out on the occasion of his stay in Lebanon in 1991. Right after the 15 years of the Civil War, the writer Dominique Eddé invited Frank along with the photographers Gabriele Basilico, René Burri, Raymon Depardon, Fouad Elkoury and Josef Koudelka to Beirut to carry out a project on the city and the war conflict.

Frank’s work is made from the Polaroid negatives that he kept of his stay in the capital of Lebanon and which later allowed him to build a panoramic image. Frank combined writing formats and some presence of the pictures surrounding the image, even making his tracks visible on paper, appealing to his book The Lines of my Hand (1972). In a passage, the text reads “building a memory of destruction”, with which Frank sets out a reflection on the use of memory but also on the role of the image.