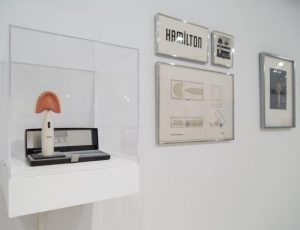 Richard Hamilton’s insistence on investigating the field of design, technology, and consumerism with the same passion and the same intellectual rigour he used to study art history was inexplicable to art critics in the UK in the fifties. These considered that this field was corrupted by its relationship with trade and industry, according to Alice Rawsthorn in the catalogue, Richard Hamilton, which accompanied the memorable exhibition held in 2014 at Tate Modern and at the Reina Sofía Museum. IVAM’s collection houses four more works from the same series, which illustrate Hamilton’s effort to erase the boundaries between high and low culture.