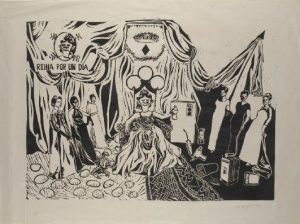 1964 was a very special year. Actually, any year can also be special in some way, but this one, 1964, was the one that Andy Warhol pointed out in POPism – the book of his memoirs – as the year in which the world rejuvenated. The Beatles were touring the US making their millions of fans sigh and cry, and a group of pop artists engaged the public in a wicked trompe-l’œil game by mixing works of art with real fresh and canned food products at the exhibition American Supermarket. Additionally, the New York World’s Fair explored the time to come with the exhibition Futurama II, an event that included, among other curious attractions, a hotel in which to spend your holidays under the sea.

In Spain, General Franco tried to make the country bloom with the sumptuous and smiling celebration of the XXV Years of Peace, while middle-class women came rushing in the first shopping malls to buy household appliances. Young women who could not afford such a disbursement had no choice but to apply to participate in the RTVE show Reina por un día (Queen for one day), the first TV sweet dream factory in Spain.

This engraving by Rafael Martí Quinto, which ridicules the grotesque manipulation of the dreams of working-class women by those responsible for the popular TV show, was made in the summer of 1964, on the occasion of the creation of Estampa Popular de València, a group of artists that would introduce some of the premises of pop art for the first time in our country as a peculiar strategy for achieving a kind of combative art at the service of the fight against Francoism and for social transformation.