Publications and counterculture in València 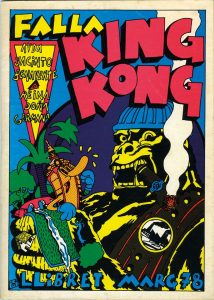 Publications and counterculture in València

During the most turbulent periods of our modernity – those in which all moral and social conventions ended up going up in smoke – publications outside the publishing industry played a determining role in the viral expansion of the most radical ideas and postulates. This was the case during the first decades of the 20th century with the emergence of the publications of the avant-garde groups, and thus the countercultural youth rebellion also spread from the end of the 1960s. In Spain, and more specifically in València, the impact of this generational response would come with a slight delay, and would overlap with the important social and political changes that occurred in the framework of the fight against the dying Franco dictatorship. In our city, València, the spirit of the political and countercultural rebellion was very early well received in a modest pocket publication dedicated to the show business, Cartelera Turia. Since it was created in 1964, its pages featured articles dedicated to theatre, music and European underground cinema throughout many years, including, for example, texts addressing the sexual revolution and the agitation of the student movement. Its covers, always made by rebellious Valencian artists, designers and illustrators including Equipo Crónica, Miguel Calatayud and Rafa Gassent – among its dozens of collaborators – were for decades the best showcase of the cultural revolt of an entire generation in our city.

The countercultural comic of American and European influence took root strongly in València during the seventies, and had the peculiarity of merging with resources and themes from the libertarian and satirical vernacular tradition such as aucas (rhymed comics) and Fallas festivity books during the time of the Spanish Republic and, equally important, with products of the kiosk culture such as the detective story. Notable from this time are some comics and self-published fanzines such as El Gat pelat, A Valenciaa, El polvorón polvoriento and Els tebeus del Cingle. This type of comic, which came to subvert the moral stands rooted in the Francoist comic strip, would find its place again in the 1990s in fanzines like Kaos, No control, Empalmar de Troya and Masakre, which mixed, in collage compositions inherited from the cheap Dada editions, comics with articles on punk music concerts, the squatter movement, sexual liberation, antipsychiatry and the use of drugs.

The Counterculture. Resistance, Utopia and Provocation in València exhibition at IVAM addresses all this and much more.