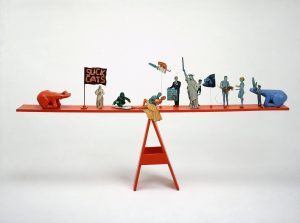 Swedish artist, poet and filmmaker Óyvind Fahlström is considered a pioneer in multimedia and interactive art. His work, originated under the influence of surrealism and focused on the search for new aesthetic and narrative codes, came to adopt the characteristic ingredients of pop culture. However, his motivations were very different from those of the rest of the authors who participated in this movement: his work always had the awareness and denunciation of the economic, political and social dominance systems as its ultimate purpose, with the Vietnam War, imperialism and the Cold War in the background.

His work, beyond its appearance as a game with elements coming from the world of comics, advertising and the media, reflects the financial mechanisms regulating power relations in an ironical, revealing, sharp and ferocious way. Fahlström was an artist convinced of the need for a transformative art that would analyse and influence the contradictions of society.

Pop imagery is three-dimensionally displayed in the form of a swing in Red Seesaw with magnetised cut-outs whose position can be modified on its particular base, offering scenes that go over the present time: the two frogs that maintain the precarious balance of both the communist and capitalist blocks, the Church’s castrating role with its 1968 disapproval of contraceptive methods against the individual and collective liberties that fuelled the student protests and the hippie revolt, among other icons of the ideological conflict back then and now.

This moralising role of his work seeks the complicity of the public, who is invited to “manipulate the world” and reveal the absurdity that surrounds us with the help of the images provided by the artist.