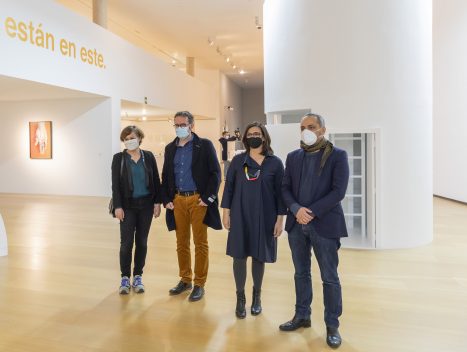 The director of the IVAM, Nuria Enguita; the curators, Guillaume Désanges and François Piron; and the director of the CAPC Musée d’Art Contemporain de Bordeaux, Sandra Patron, have presented to the media the exhibition ABSALON, ABSALON. The exhibition, open to the public from March 25, proposes a journey through the work of the Israeli artist Eshel Meir, known as Absalon (Israel, 1964 – France, 1993), through a selection of drawings, models, sculptures, plans, prototypes and videos.

The exhibition relates these works by Absalon with the artistic pieces of seven international creators with whom he formally or conceptually dialogues. These are Marie-Ange Guilleminot -the artist’s partner since 1990-, Robert Gober, Mona Hatoum, the choreographer and dancer Alain Bouffard, Laura Lamiel, Myriam Mihindou, or Dora García.
“Eshel Meir, known as Absalon, developed an important body of work focused on the idea of inhabiting, understood here as the relationship between a body and a space. He did this in a very short period, until his premature death in 1993 at the age of just 28”, said the director of IVAM, Nuria Enguita, about the artist whose legacy “is very influential today, not only for contemporary art, but also for architecture and design”.

The exhibition at IVAM brings together some of his famous Cells, which he began to make in 1992. These are individual houses designed to fit his body size, which he called cellules (cells, but also cells rooms) and which were equipped to attend to the basic necessities of life: sleeping, eating and toileting. “Absalon’s works, under the apparent superficial minimalism of his pieces, raise interesting reflections on the value of privacy, in a society where the individual is increasingly vulnerable, or on the emancipation of the physical body in relation to the social body. His proposal was political and emancipatory, although more of resistance than of insurrection,” Nuria Enguita said.

The exhibition is co-produced between the IVAM and the CAPC Musée d’Art Aontemporain de Bordeaux -where it will be exhibited after its visit to Valencia- and takes its title from a biblical quote that speaks of Absalom, a son of King David who rebelled against his father.

Cell No. 1, with an area of 9’24 m2, welcomes the visitor. It contains a kitchen, a bed and a toilet, halfway between a monastic retreat and an air-raid shelter. The white color of the construction and the narrowness of the space it generates do not allow distractions that divert the attention from the body. Everything starts from primary forms, such as the circle, the square or the rectangle. These are forms that Absalon empties in order to rework their interior from a critical perspective. Once emptied, the artist reintroduces new, equally basic forms, but which provide a rich conceptual content.

The co-curator François Piron insisted that “the cells are not utopian. Absalon planned to install them in Paris, Zurich, New York, Tokyo, Frankfurt and Tel Aviv to live in for periods of three to six months, although his premature death thwarted this part of the project.” To build them, he was inspired by the cities where they were to be shown. In this sense, Cell No. 3, representing New York, refers us to a machine, enhancing the vision of a city in fervent ferment. The house planned for Frankfurt, Cell No. 5, is a cylindrical room in the shape of a tower-bunker, according to the artist’s conception of Germany.

“The houses are custom-made for Absalon. This form of individualism has to do with solitude and individualism, but it is also a polemical gesture against society, it is a project that proposes other laws, other ways of life,” clarifies the co-curator Guillaume Désanges. “There is a critique in Absalon’s work against consumerism and against the way of life imposed on us by capitalism.”

Through drawings and clippings from publications, the exhibition discovers the working process of these productions and the work of abstraction they entail. The exhibition also includes the videos Bataille (Battle) or Solutions (Solutions), in which Absalon himself interacts with the space. The models of the six cells, drawings, some of the first works Absalon made, such as the sculpture Sisyphe (Sisyphus), or the recording of a performance in which the artist screams to the point of exhaustion, complete the exhibition that will be on display until May 23 at IVAM.

“Reconsidering Absalon’s work almost thirty years after his death implies reflecting on its uniqueness, but also on its proximity to a generation of artists that emerged from the 1990s onwards, who reflect in turn on the body and architecture,” Nuria Enguita has added. “These artists raise notions of vulnerability, but also of will and effort, and are fundamental to understanding a form of revolt against conditioning, as well as raising the need to reconstruct practices and spaces that are both mental and physical. This is the case of Mona Hatoum, for example, who raises these questions from a decolonial and anti-racist perspective, and brings to light the deterministic mechanisms of oppression. Or the works of Laura Lamiel and Myriam Mihindou, which, like Absalon, are built around a vocabulary of objects in terms of personal rituals and carry great symbolic power. The notion of whiteness in these artists acquires a spiritual function, associating concrete space with mental space,” concluded the director.