The Institut Valencià d’Art Modern (IVAM) presented today the campaign “Become a friend of IVAM”, which has been illustrated by the Valencian strip cartoonist Sento Llobell. The director of IVAM, José Miguel G. Cortés, joined by Sento Llobell, has explained the details of this programme, which “aims to make people come to IVAM, a task in which we want to involve society and everyone who loves art and culture”.

Sento Llobell has noted that “the proposal for collaboration with IVAM seemed fantastic to me because it means that comic is entering the museum and, at the same time, that IVAM supports the printed art of comic books”.

The image he has designed for the campaign is “light, black and white, and it represents a family headed towards the IVAM”. On the occasion of this campaign, folded leaflets have been edited which contain information about the different categories of membership. The strip cartoonist has intervened part of the museum’s façade with the campaign’s image.

The director of IVAM has also presented new signs that, as an essential element of communication, “have to change and be renovated in order to make visits to the different areas of the museum easy”. The pictograms and the new typography are inspired by ‘Daphné’ (1937), a work by the sculptor Julio González, one of the most important pieces in the museum’s Collection.

As part of this effort made by the museum to renovate itself and to make communication with the public more fluid, a new website has been designed, “not only to make it more attractive from an asthetic point of view, but mainly to improve its functionality”, José Miguel G. Cortés remarked.

This new portal makes browsing easier for users and allows them to find what they’re looking for with ease. It has been created with a format which adapts to any kind of device: either mobile phones or tablets. “We have included a new menu called Visit, with the slogan “See you at the IVAM”, and the sub-menus: plan, visit, experience, learn, feel, enjoy and surfing, which are the aspects that IVAM intends to offer its visitors”.

The homepage has a header with a slideshow in which the highlights, the most relevant exhibits or activities in the programme, are stressed, with large images, the dates of the exhibitions and their titles, which allows to link the most detailed information.

José Miguel G. Cortés remarked that “the Collection has an important role in the new design and, in that section, the IVAM Catalogue access is included”. In the Exhibitions section, a calendar has been attached to indicate the access dates and, as a new feature, “the offer of related contents, whether those are guided tours, educational workshops, press releases or film screenings, is included”, the director explained.

Another new feature is the incorporation to the IVAM’s website of videos from its YouTube channel and the emphasis on social media in order to promote the interaction with users and so that they can share the contents.

In the new website, the IVAM’s Library gets special attention. In this sense, the director of the museum has announced that “the IVAM’s Library will be provided with more means in order to show its immense collection, and exhibits related to the documentary collections will be organised”.

The renovation of IVAM also includes a new summer schedule from 12.00 to 20.30 “with the aim of extending the afternoons in order to take advantage of the sunlight hours in the city, and to facilitate visits after school or work hours”, Cortés remarked. 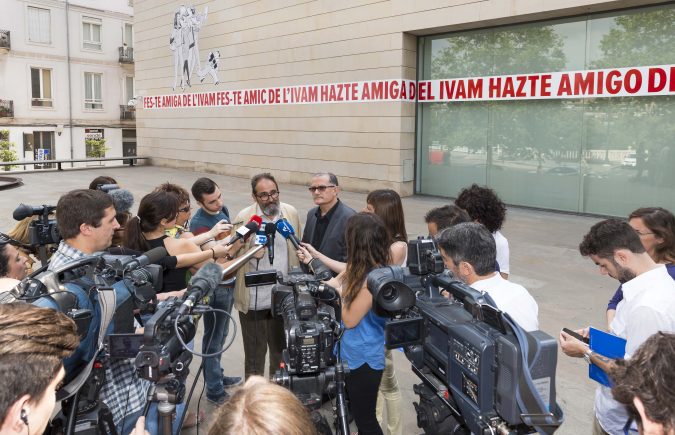