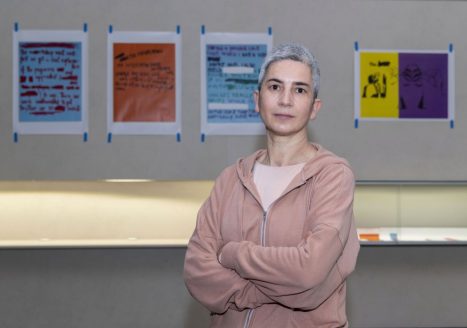 The artist Azucena Vieites is involved in IVAM with queer feminist posters.

The project reflects on gender issues through appropriation, serialization and remake.

The artist Azucena Vieites (Hernani, 1967) presents from Thursday February 18 on, a project for the IVAM in which she exposes the museum’s transit spaces with posters created from queer feminist fanzines. On the occasion of the presentation, the artist will talk with Sandra Moros, IVAM’s curator, on Thursday, February 18 at 7 p.m. in the museum’s auditorium about this proposal entitled Rehacer Break Out of Your Shell, 2020-2021 (reservation required at ivam@consultaentradas.com).

Azucena Vieites explains “Break Out of Your Shell is the title of a non-sexist coloring book, for boys and girls, that I discovered and decided to use for a work that consisted of drawing from the reading of queer feminist texts. I am interested, above all, in this process of the abstraction of the image, of breaking the narrative, altering the way of writin”.

The project, which occupies a wall and a display case in the IVAM’s lobby, is made up of seven posters that reflect on gender issues. Some of them are composed of texts that were originally painted or drawn by the artist from motifs taken from fanzines or queer feminist magazines. Others construct images that arise from drawings previously made by Azucena Vieites, leaving visible Do It Yourself (DIY) traces that reveal how they were hung or exhibited. The last poster, which shows the silhouette of a body, acquires in this “remake” a new function: to be the folder that stores the posters when they are folded, halfway between an artistic work and a publication.

Rehacer Break Out of Your Shell has the workshop on feminist fanzine that the artist herself taught with students from the city of Valencia based on the use of low-fi aesthetics and the notion of DIY as its starting point. DIY practices have characterized Vieites’ work since the 90s, when she began to take independent magazines or processes and images of low-fi music as a reference, especially riot grrrrl girl groups, which broke the gender stereotypes constructed by the more commercial cultural production sphere.

A very relevant part of this project is also based on some collages from her work Break Out of Your Shell, 2009. The action of “remaking” is a common process in Vieites’s work. Out of the artist’s characteristic work process arises the fundamental question about when her work can be considered completed. So, continuous processes are produced on their surfaces as an infinite loop.
“I have always worked with the idea of remake. The same image can be transformed into something totally different by using different resources such as collage, silkscreen, photography, drawing, etc. Somehow I try to give new life to old images with my work and, in this way, offer new reading”, said Azucena Vieites.

The exposition by the artist from Guipuzcoa will be in some of IVAM’s liminal spaces until May 2021.