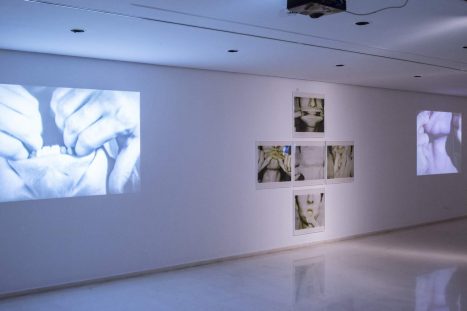 With the aim of going beyond the exhibit, of delving into the study of the work of an artist who is present in the IVAM collection, IVAM presents ‘Case Study. Body, Space and Time in Bruce Nauman’. It is a selection of 14 works by this North American artist –ten of which belong to the IVAM collection and four of them courtesy of Electronic Arts Intermix– which are presented together with works by Man Ray, Marcel Duchamp, Georges Hugnet, Samuel Beckett, Richard Serra, Steve Reich, Merce Cunningham and John Cage, to provide a context and to analyse Nauman’s (Fort Wayne, Indiana, 1942) work.

The exhibit begins in the landing of the first floor of IVAM, where two films by Samuel Beckett –Film (1965) and Quadratt I-II (1981)- are shown, which serve as an introduction to the sense of circularity, of the lack of beginning and ending in Nauman’s first works.

Once in the room, the tour of the exhibit begins with the analysis of Nauman’s film and video production, developed between 1967 and 1969, in which three different blocks can be distinguished. The first one contains the films he made in his studio in Mill Valley (1967), in California, in which he intended to experiment with Gestalt’s theories, transforming any daily activities into art, as is the case of Bouncing Two Balls Between the Floor and Ceiling with Changing Rhythms.

The second block is composed of the videos performed during his stay in Southampton (1968-69), New York, when he worked exploring the possibilities of handling the camera and of its effects on the mechanisms of our perception. On the one hand, on space, creating an extraordinary tension between the states of mobility and immobility —Revolving upside down, Wall Floor Positions, Stamping in the studio—, and on the other hand, on the evaluation of time, causing alterations between sound and movement –Bouncing in the corner nº 1, Lip Sync, Violin tuned D.E.A.D..

The last block collects one of the filmings executed in slow motion in Los Angeles (1969) in which he wanted to achieve the abstraction of the image by causing the deceleration and the splitting of movement. This piece is the precedent to a series of photography snaps, carried out in collaboration with Jack Fulton about facial and body manipulation and based on his drawings from 1967. Studies for Holograms (A-E), 1970, are part of this production team, in which Nauman explores his own body as expressive material by using different techniques such as infrared photography, holograms or film.

The visit continues with two videos that praise the evolution of the work of this artist from the seventies on. Flesh to White to Black to Flesh contemplates Nauman’s ideas regarding self-representation, closely related to Samuel Beckett’s work, and the idea of the mask as a metaphor for conflict, order and concealment, and it introduces the political connotations in his work. Tony Sinking into the Floor; Face Up, and Face Down announces the removal of the artist’s presence in following works in order to give prominence to the public, who, from then on, is encouraged to experiment and collaborate on his works.

Next to these two films, a video installation, Good Boy Bad Boy, 1985, is presented, in which sound, wordplay and semantic changes are brought face to face continuously to question the audience, and a piece of graphic art titled Frankfurt portfolio, 1990, which shows us the typical elements of Nauman’s specific language such as duplication, reflection and repetition, which he uses to gather different layers of complex meaning.

In the postminimal cultural context, which emerged during the sixties in the United States, Bruce Nauman’s artistic work starts by taking his body as a central axis, an axis he keeps present during his whole career and that is analysed in depth in this exhibit. Nauman uses it sometimes as raw material, and sometimes he tests it in space and time, subjecting it to limitless sensory experiences. In every case, the tense balance between concepts and experiences is put in the front line. His works require constant attention and great effort by the spectator, who is forced to compare two types of information, the sensorial and the intellectual, which Nauman manipulates, twists and constantly compares.

Nauman studied at the University of Wisconsin in Madison between 1960 and 1964, first mathematics and then art, and at the University of California in Davis between 1965 and 1966, one of the birthplaces of the thinking of the Beatnik generation and the Funk movement of non-objective art. At the beginning of his career he made sculptures, performances and films in which his body became the subject and the object of the representation, taking it to the most extereme limits of physical action.

In the seventies, he started building not only architecture in which the spectator was subjected to distressing situations and spied by surveillance cameras, but also models of tunnels made with waste materials. These pieces were followed by great hanging sculptures made of molten iron and steel and colorful neons, with political connotations that marked his production until the mid-eighties. By then, his work evolved by recovering formats that he had not used since his beginnings: the work with melted objects and video, or the combination of both. In them, stuffed animals, fragmented anatomies and tormented characters became metaphors for violence, pain and suffering.

Nauman’s work is influenced by multiple elements. Some are derived from different artistic trends of the time, such as conceptual art, body art or process art; others are circumscribed in the territory of other disciplines: literature, dance, film and photography, psychology or philosophy.

In many of his interviews, Nauman spoke about the origin of the foundations of his art: about Fredrick Perls’ Gestalt Therapy and the means to be aware of our body; about Ludwig Wittgenstein and the method he used to think, with its games and language’s limits; about Roland Barthes and the pleasure that emanated from reading when the known and the unknown were faced; about Merce Cunningham and the way in which she built dancing with day-to-day activities and movements; about La Monte Young and his concept of continuity in music. We can also find in his work quotes that reference his favourite writers: Vladimir Nabokov, Samuel Beckett, Malcolm Lowry, Richard Wright, Ralph Ellison, Alain Robbe-Grillet and Elias Canetti, among many others. And thanks to all these small contributions we can not only set his work in a context, but also try to follow the intellectual process that he set in motion to carry it out, which becomes the first aim of this exhibit.

As a preview to the exhibit, on Monday the 23rd of February at 19.30 a team of students from the Conservatorio Superior de Danza de Valencia, integrated by Belén Pérez, Paula Pachón, Noelia Pastelero, Paula Romero, Marta García, Mª Carmen Guirado, Daniela Quinchi and Manuel Caldito, and under the guidance of professors Tatiana Clavel and Santi de la Fuente, will present a performance conceived on the occasion of this exhibit.