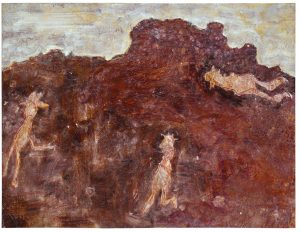 The artistic vocation of Jean Dubuffet was made evident too late and one of the driving forces that would mark his plastic and written production was the Second World War, which devastated Europe and was understood by him, and by many others, as the failure of Western culture. Thus, as explained by Baptiste Brun, specialist in Dubuffet’s work and curator of the Jean Dubuffet. A barbarian in Europe exhibition (9 October 2019 – 16 February 16 2020), one of the artist’s goals was to build a new society by changing its cultural parameters and reclaiming the figure of the common man, as opposed to some elites that had led the European continent to disaster for the second time in less than thirty years. This goal did not imply, however, that Dubuffet did not make an in-depth analysis of culture, both of Western countries and other places in the world, and that he did not surround himself, as he did well, with intellectuals, artists, writers, publishers or psychiatrists, in his search for a model of culture that would get rid of prejudices and stereotypes and recover the essence of the human, in all its facets.

Missions secrètes (1953), currently exhibited in the IVAM exhibition Times of Upheaval, was acquired more than twenty years ago and is part of the vast IVAM collection dedicated to Informalisms, including works that the public could visit both at IVAM and in other institutions. It belongs to the series of Dubuffet’s material landscapes in which the artist deliberately destroys the concept of painting as a window by subverting the laws of the traditional perspective. Landscapes are walls in which, in the words of Baptiste Brun and Isabelle Marquet: Dubuffet resorts “to the use of natural raw materials, which he mixes in compositions in which the figure and the material are mixed up, in the same way that his characters blend into the landscapes, thus challenging the gazing habit”.

In these times of crisis we are in a situation of uncertainty. Although the war rhetoric abounds, and is liked, this is not a war; fortunately, there is not a series of human beings doing their best to murder or make other human beings disappear in our European societies. However, there is a way of life in crisis and it is showing, in difficult times, all its shortcomings in the harsh light of an unprecedented health emergency in recent decades.

Just as Jean Dubuffet took the baton of a society in ruins to bet on new values, this may be an appropriate time for personal reflection on the values that support our society, now shocked by an emergency present that has disrupted all normality, and also shocked by an uncertain future, and to decide what values represent us as human beings and how our behaviour and our way of life can contribute to making those values a reality.