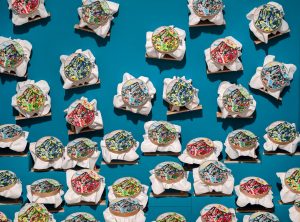 Isabel Oliver’s first works emerge in the 1970s, in an artistic context dominated by men in which women were almost invisible. Her paintings, laden with social criticism and strong feminism, show the submission of women to a consumer society that breaks them down in order to achieve the canon of beauty set up by a macho and patriarchal society. The series Occupation: housewife speaks of conventionalisms, of the traditional training in housework for women, and of imposed rules and roles that limited them to a mere decorative object, as were the pictures made using the popular cross stitch or petit point technique panels, in which one works on a previously screen printed pattern that must be completed with the needle, using a frame that tightens the fabric and makes embroidering easier. That same cross-shaped stitch is the one emulated by Isabel Oliver in her sixty frame-mounted landscapes making up this installation, in which the painter reinterprets her own occupation.