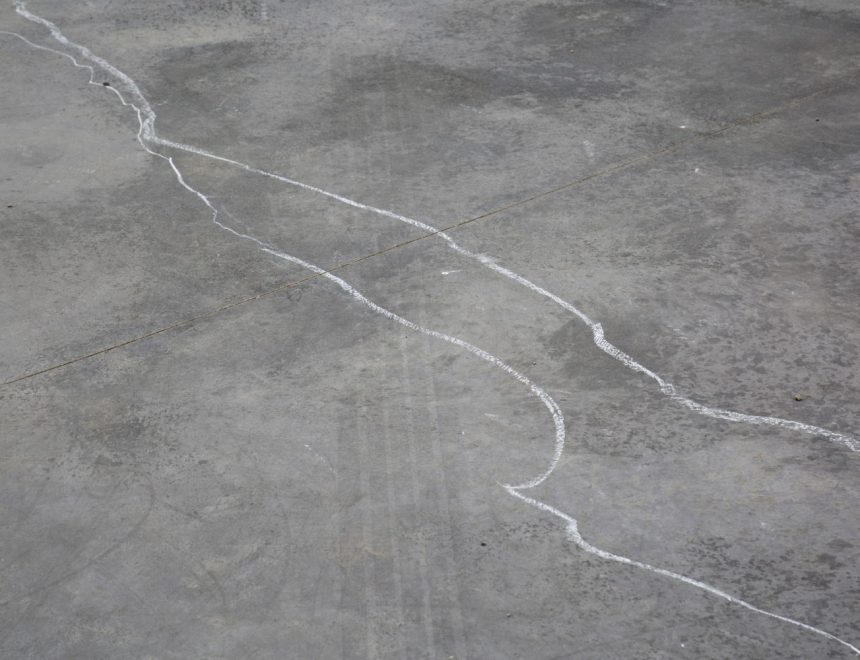 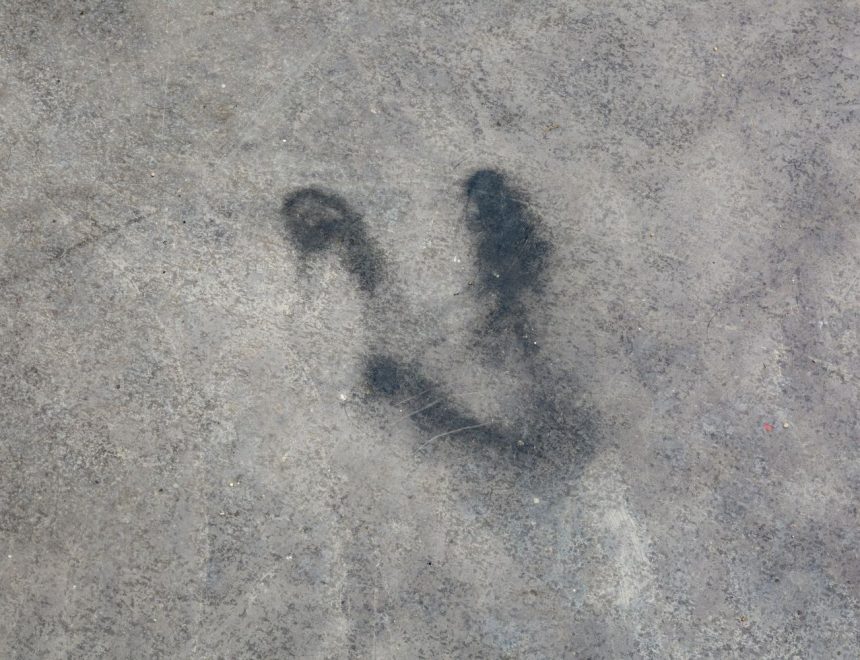 The painting installation invites the visitor to cohabit with the painting, conditioning the current state of the action in function of their determination, their time and their passage through the space, whether it be by observing it, stepping on it, spoiling it or, simply, leaving their prints.

The project focuses on a personal graphic transcription on the immediate surroundings of the IVAM, taking its starting point in a compilation of drawings and visual traces left on the ground in the garden behind the museum. An ongoing visual examination of the ground recovered lost gestures that speak of how the city is used as a support for plastic visual expressions and also of its wide capacity for inhabitability.

Every Sunday following 19 May, the day the art centre proposed this project to me, I have explored the surroundings of the museum and especially the garden behind it. On my first visit I discovered a number of drawings on the ground that reminded me of children’s games, doodles and traces that looked like signs or codes between anonymous people who had made them to communicate with each other.

On my following visits I continued looking at the ground and saw that there were new drawings, telling me that the anonymous artists were prolific. On my fourth visit I was particularly struck by one of the new drawings which depicted a long, shapeless form composed of two very irregular parallel lines that gradually narrowed until arriving at the word “salida” [exit]. The addition of text marked a difference with all the other drawings, turning it into a path leading to that word. The form struck me as very attractive and organic, while at once containing an underlying aggressiveness that dovetailed with the aesthetic posits of my own world.

The drawing matched to perfection the idea I had for the project, given that the location assigned for the proposed intervention connected the entrance/exit to the museum with IVAM Lab, a space conceived to communicate, a place people pass through.

Which is why the following relations that arose during the course of the research struck me as particularly suited and interesting. The formalization was conditioned by the parameters in which my own work is bounded: the city, its uses, inhabitability, ground, dirt, trace, print and changes of the surrounding environment. A relation between entrance and exit, path and passage. The aforementioned garden facilitates access to the museum, leading directly to the lobby. A compilation of elements from the exterior of the museum for their development inside the museum. Time and continuous alteration of our surrounding space. Work around the museum. An approach to the centre itself.

The basic references I am using for the installation are taken from an inventory previously compiled during my visits to the surroundings of the IVAM. At the moment, the painterly transcription represents an alphabet of symbols comprising forty-five drawings, with the possibility of further expanding it right up until the date of execution of the intervention.
A publication will be printed on paper with the goal of documenting the glossary of symbols obtained during the working process. The brief publication will include a text and will also function not just as an in-hall leaflet, but also as a collectible piece for visitors (for instance, a fold-out, poster, or small format book).

The work is materialized by covering the floor of the hall with white non-slip vinyl to create a homogeneous and hermetic space. The room thus produced will operate as an empty canvas on which to individually represent the transcription of the drawings obtained in the surroundings of the IVAM.

I will paint directly on the vinyl floor using various techniques including markers, spray and enamels. The walls will be left bare, thus forcing our eyes to look towards the ground, stimulating a direct cohabitation between the visitor and the painting, which, once again, will represent the references compiled around the garden, now layered one on top of another. The walls are left bare so that the printed publication can be placed at some point.