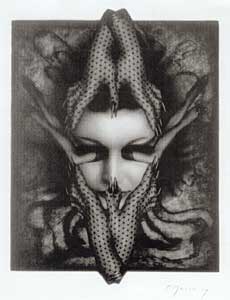 This is probably the most important exhibition that has been devoted to the French artist Pierre Molinier, and it aims to provide the keys to a world pervaded with sexuality and the championing of enjoyment. The exhibition presents about a hundred works (especially photographs and photomontages, the technique for which he is most famous, as well as paintings, drawings, prints, erotic objects, the short film Mes jambes, 1965, made by Molinier himself, and a sound recording), obtained from collections and art centres in Paris, Bordeaux and New York. Pierre Molinier’s poems, Les orphéons magiques, are published in Spanish for the first time in the catalogue, which also contains essays by Juan Vicente Aliaga and Giulia Colaizzi. Throughout his retiring life, Pierre Molinier (Agen 1900 – Bordeaux 1976) had a reputation for being a person with a violent, irascible temper. Apart from this characteristic, his sexual behaviour, far removed from the moral hypocrisy and customs of his time, was the object of equivocal reports. He came from a modest family in which his mother made him feel the weight of religion, while his father developed an interest in painting in him when he was still a child. Various fragments of his intimate biography have doubtless provided a heterodox aura with respect to a sexuality in which fetishism focused on legs, calves and the media enveloping them—stockings, high-heeled shoes, etc.—played a primordial part. Before representing his obsessions on photographic paper, Molinier devoted himself to the practice of painting, an activity that he exhibited at the Société des artistes indépendants bordelais, which he helped to found in 1928. In the fifties there was a shift in his pictorial work, with the introduction of an erotic iconography in which the woman’s body was seen as a territory of masks and artifices. Accompanied by allusions to religion (the divine and the diabolical), Molinier’s women exhibit a self-sufficient, narcissistic sexuality, self-absorbed in a decadent pictorial atmosphere. During this period there was a distancing from the art community of the city where he lived, because of the rejection produced by one of his erotic paintings, Le grand Combat (The Great Combat). In 1955 he contacted André Breton, who helped him to exhibit in Paris at the gallery À l’Étoile Scellée, and he contributed to the magazine le surréalisme, même. But the friendship with the guru of Surrealism did not last long; the reason for their disagreement was the painting Oh! … Marie, Mère de Dieu (Oh! … Mary, Mother of God). In the reclusion of his small flat in Bordeaux, Molinier concentrated on painting and photography, using the presence of male and female friends and cross-dressing: a velvety atmosphere in which the search for pleasure became the central focus of his existence. Sexual ambiguity became more prominent in the photographs and photomontages of the sixties and seventies, in which Molinier himself, dressed as a woman, manipulated a huge number of objects and accessories, which he used to create a fetishistic, onanistic view of sexuality (continued in his work with Thierry Agullo and Luciano Castelli). Despite having taken part in many exhibitions, including important events such as Transformer: Aspekte der Travestie (1974), organised by Jean-Christophe Amman in Lucerne, or the exhibition devoted to him by the Centre Georges Pompidou in 1979, three years after his suicide, his work is practically unknown to the general public. Revered and admired by a small following, Molinier’s work, radical in its sexuality without strict categories, seeks to create fantasised, fetishised bodies in which man and woman mix and merge together. It has currently acquired a special cachet as a result of the revival in gender studies, especially in English-speaking countries. L’enfant homme (The Child Man), 1968–70