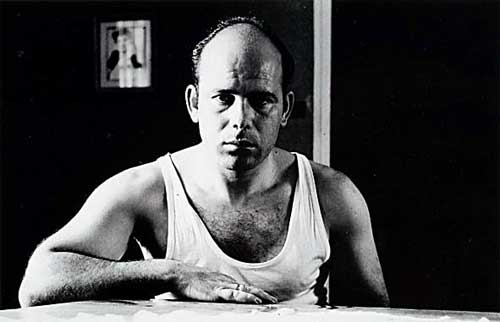 Gabriel Cualladó’s work is one of the pillars of the IVAM Collection of Photographs. The selection we present now is a tribute to the great evolution that took place in his work during his whole lifetime and which represents the spirit of change in Spanish photography that came about in the nineteen fifties, by imbuing his realistic view of instants of everyday life with great humanism. These images reflect events witnessed by Gabriel Cualladó without any need for momentous or dramatic subjects or famous and prestigious personages, representing simple scenes of his family and friends, natural situations that can only be photographed when they are part of one’s life. His work is our family album and forms part of the historic memory of our people, because it goes beyond the threshold of the reality observed to delve into our own experiences or memories and become authentic icons of a universal family album, where the classical controversy between aesthetic concerns and social commitment finds a peaceful compromise. It is impossible to enumerate the exhibitions held by Gabriel Cualladó or the prizes he was awarded at the outset of his career, when he attempted to change the reactionary condition of Spanish photography with his friends in La Palangana or Afal group, starting with the simple pictures of his first child in 1951 until he became one of the foremost referents of photography in Spain. This recognition reached its peak in 1994, when he was granted the National Photography Award by the Spanish Ministry of Culture, and in 2002, when he was awarded the Alfons Roig Prize by Valencia Provincial Council. With the idea of showing all the course of Gabriel Cualladó’s trajectory, the IVAM has been honoured with the indispensable collaboration of his family, who have presented twenty unpublished black and white works and sixty of his most recent colour photographs alongside a selection of twenty of his most emblematic pictures from the IVAM collection. The catalogue of the exhibition contains reproductions of all the photographs displayed, with a foreword by the Director of the IVAM, Kosme de Barañano, an introduction by Josep Vicent Monzó, curator of the exhibition, and a selection of brief texts by some photographers who were close friends of Gabriel Cualladó’s for many years.