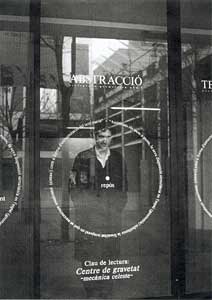 The exhibition presented by the poet and librarian Ramon Dachs (Barcelona 1959) consists of an intervention on the three horizontal glazed surfaces in the façade of the IVAM (4.80 x 9.30 m). In them he develops for the first time the “fractalization” inherent in the Escriptura geomètrica that he introduced in 1998 in Panorama vitri d’escriptura geomètrica (a solo exhibition organised by the Faculty of Mathematics and Statistics of the Universitat Politècnica de Catalunya in Barcelona). Escriptura geomètrica consists of six texts inscribed within a modularly repeated definition-circumference with the declaration: “With the assimilation of words to points, their simultaneous positioning in space (geometry) replaces the temporal linearity in which they usually follow one another (syntax) as a way of organising written text”. The three windows also include a 1/3 scale reproduction of the geometric writings translated into Spanish, French and English, in magenta, yellow and cyan, and, on the same scale but in black, the equivalent translations of the corresponding fractal writings, all against a uniform grey background. Geometric writing, as the author says in the catalogue, provides a new qualitative leap in the textual progress of poetry and literature towards non-linear writing, achieving a graduation that follows on from Mallarmé—and the first avant-garde movements—(stepped lines, reduction of punctuation) and Gomringer—and concrete poetry—(two-dimensional presentation of discourse, suppression of sentence connectors), in a direction diametrically opposed to that of the calligram and visual poetry (it is not a matter of visualising or creating a sensory materialisation of semantic contents but of arranging them cognitively), which should rather be associated with Pythagoras, the “figures” of Ramon Llull, mediaeval Gothic and Mudéjar architecture, the Cubist movement, Webern’s minimal dodecaphony or Mondrian’s Geometric Abstraction. And geometric writing is, above all, fractal writing. The basic principle of the theory of fractals established by Benoit B. Mandelbrot, especially in Les objets fractals (1975), is the invariance or self-similarity of the configuration of a geometrical structure examined partially on different scales. Ramon Dachs extends this basic principle to his writing. “Each piece of geometric writing uses a key associated with a point structure to fix a matrix that reproduces undefined fractal writings.” This is the definition-circumference of fractal writing, conceived as echo, reflection and shadow, splitting and unfolding, in a perpetual process that replicates each geometric word-point with a parallel fractal word-point. A zero state from which writing is self-generated towards infinity. Or infinite possibilities, among which one specific realisation of writing takes physical form and comes into being. Thus, each of the six pieces of geometric writing inscribed in white on the lower part of the windows is echoed by a parallel piece of fractal writing inscribed in black on the upper part, consisting similarly of word-points inscribed within a modular definition-circumference and paratextualised by a title (symmetrical with the title of the corresponding geometric writing, from which it takes its interpretative key and word-point structure): – fractal writing 1: Twilight (echo of Shore) key: (symmetry) – fractal writing 2: Story (echo of Biography) (segment) – fractal writing 3: Generation (echo of Contingency) (12 equilateral triangles in a six-pointed star) – fractal writing 4: Reproduction (echo of Body) (regular tetrahedron) – fractal writing 5: Life (echo of Abstraction) (centre of gravity) – fractal writing 6: Maturity (echo of Temporality) (orbital intersection) The inclusion in the catalogue of the present exhibition of the entire text of Escriptura geomètrica, escriptura fractal brings to its culmination the printed publication of the twelve parts or books that make up Euràsia, the complete cycle of Ramon Dachs’s poetry produced between 1978 and 1999. In this cycle, from which the catalogue includes a systematic selection of texts, non-linear writing is also approached by means of intertextuality (Quadern rimbaldià, Majorca 1996), hypertext (Intermínims de navegació poètica, Barcelona 1996; the first hypertext collection of poems by an author published in Spain), appropriated diachronic collective text (Cent un juejus de Xina Tang, Valencia 1997; the first documented anthology of the classical Chinese chüe-chü published in a European language), plurilingual textual variation (in Galician, Cima branca, La Coruña 1995; in French, Blanc, Majorca 1998; in Spanish, Fronda adentro, Madrid 1999) and extreme segmentation of simultaneous utterances (Tot i res: Monosticha Catonis, Badajoz/Lisbon 1999).