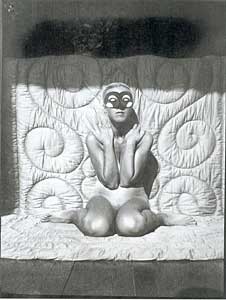 Claude Cahun (Nantes 1894 —1954), born Lucy Schwob in an upper-middle class family, studied at Oxford and Paris (she read Philosophy and Literature at the Sorbonne). In 1935, together with Georges Bataille and André Breton, she took part in creating the left-wing Contre-Attaque group. Throughout her life she gave rise to confusion about her identity; her pseudonym, Claude, a name which in French is used for both men and women, was a clear invitation to the provisional nature of her identity. Not only did she wear men’s clothes or exotic, outlandish costumes and appear with her hair cropped close, dyed pink or in shades of gold, but also she adopted affected or even effeminate poses. Claude Cahun, who was also a writer, producing poems, literary criticism, essays and short stories, employed the immediacy of photography to undermine the supposed objectivity of this medium, accentuating the dynamic, changing, performance quality of the poses with which she displayed her slippery personality, in which masculine and feminine traits blended to create an indeterminate literary character, in a deliberately sought and laboriously worked ambiguity. In other works she appears as a devil, an angel, or a blind woman guided by a member of the cat family. She also took numerous photographs in which she composed scenes featuring unusual objects with innovative approaches. She took portraits of Robert Desnos, Jacqueline Breton, Henri Michaux and Sylvia Beach. She also illustrated various books by Lise Deharme, including Le Coeur de Pic (1937). The exhibition presents some seventy photographs by the artist which range over her entire career, from the early days to the end of her life, including portraits of herself and others, photographic scenes and still-lifes, and documentation about her life and work.