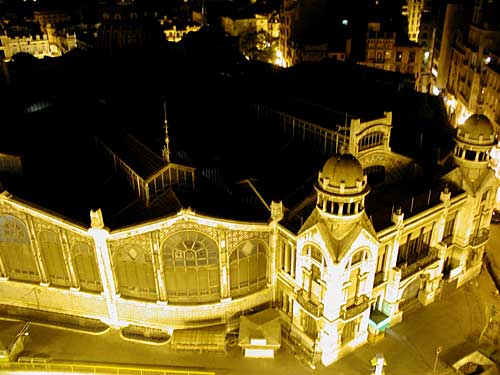 The exhibition is a tour around the geography and society of the Valencian Community: urban and industrial landscapes, historical buildings, people… in a series of pictures taken by the American photographer Christopher Makos, an artist Andy Warhol described as “the most modern photographer in the United States”. Christopher Makos (Lowell [Massachusetts], 1948) grew up in California before moving to Paris, where he studied architecture and later worked as an apprentice with Man Ray. Since the early seventies, he has worked at developing a style of boldly graphic photojournalism. His portraits of anonymous people in night clubs and exponents of the pre-punk, glamrock and punk movements reflect the blunt photojournalism of his early years, capturing the essence of this period in a crude, prosaic style. His photographs have been shown at numerous exhibitions in galleries and museums in the US, Europe and Japan, and published in countless magazines and newspapers all over the world. A key figure of the New York contemporary art scene, he was a friend of Keith Haring, Jean-Michel Basquiat and Andy Warhol, with whom he collaborated in printing black and white photographs. He was art director of Warhol’s first book of photographs, Exposures, and collaborated in his first photograph exhibition at the Robert Miller Gallery. In his work for Interview, Makos produced his “makollages”, consisting of strips of several overlapping photographs. He also made audacious full-size portraits using a method of perspective correction popularised by David Hockney around that time. His style has undergone a great transformation; although it still contains a documentary component; he presents his work in large formats confronting images that are apparently opposites but in fact emphasise the author’s need to create a closed sequence to tell his stories. Christopher Makos has published five books: White Trash (Stonehill Publishing Company, New York, 1977), which documents the pre-punk atmosphere of New York City night clubs; Warhol: A Personal Photographic Memory (New American Library, New York, 1989), which contains 150 black and white photographs that are a chronicle of his close friendship with Andy Warhol and the trips he made with him, from Beijing and Barcelona to Aspen and Düsseldorf. Makos’ photographs reflect Warhol’s world and his personal views of fashion, travel, shopping, photography and art. In his later books, Makos Men: Sewn Photos (Pohlmann Press, Los Angeles, 1996) and Makos (St. Martin’s Press, New York, 1997), he concentrates on the homoerotic motifs that make up an important part of the photographer’s work in a more and more refined, sensual and elegant style. He has recently brought out Andy Warhol by Christopher Makos, published by Charta, Milan, 2002, a book containing texts about Andy Warhol and photographs of him. His portraits of Warhol, Keith Haring, Tennessee Williams and other artists have been published in magazines like Interview, Rolling Stone, House and Garden, Connoisseur, New York Magazine, Esquire and People. Although internationally acclaimed as a photographer, in the last few years he has also tried his hand at creating paintings and has made artistic silkscreens and serigraphic prints, such as his portfolio on Man Ray, a tribute to his first mentor, and the portfolio Makos’ Icons, a collection of serigraphic portraits of Andy Warhol, Elizabeth Taylor, Salvador Dalí, John Lennon and Mick Jagger. He made his first trip to Spain in 1983, followed by many others because of the attraction he felt for the boom of Spanish culture and his contact with Madrid night life, reflected in the exhibition of his work held at the IVAM in 2001, where he presented an American view of Spanish culture, continuing in the line of his earlier works.