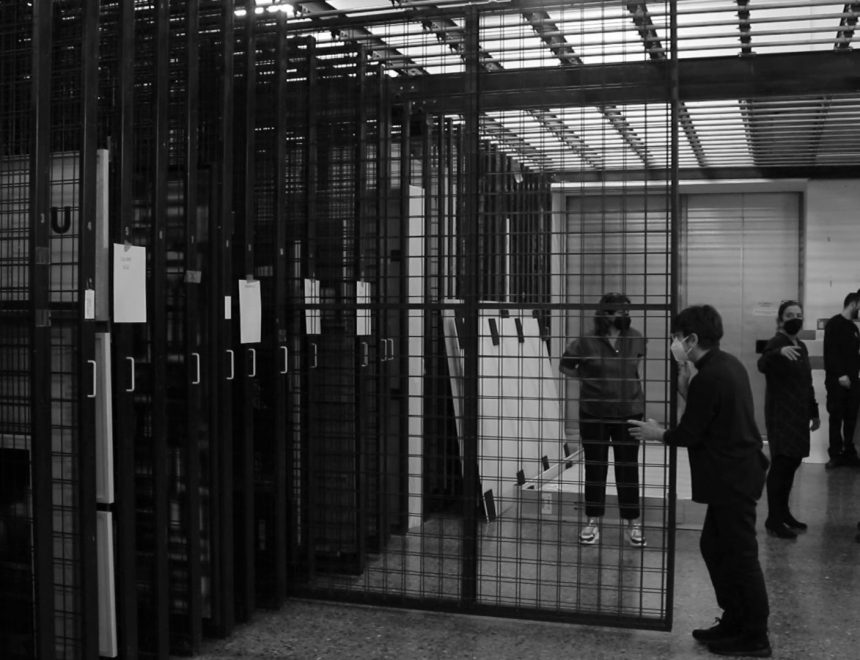 24 Frames is an interactive audiovisual installation created specifically for the place where it is located. It is linked to the exhibition Mechanical and Technical Imaginaries in the IVAM collection.
The project was born in the group Laboratorio de Luz, belonging to the Universitat Politècnica de València.

The installation offers the public a multiple view of the museum space, articulating in its images and sounds, different places and times. The here and now that the machines record in real time is juxtaposed with images and pre-recorded sounds of the museum’s internal spaces, which also constitute a distribution network of non-visible elements to the public: air conditioning ducts, electrical or computer networks. All of them reflect other mechanical and technical imaginaries that support the IVAM collection.

The small technical devices that 24 Frames installs in the space, allude to a cinematographer with multiple eyes/ears. What they see and hear is also shown, multiplied and fragmented in two rows of visual and sound devices. The first row, composed of 24 screens, displays the movement of the frames. In them, what is seen in the here and now is superimposed on what is not seen, what is imagined or what could not be there. Images and sounds are juxtaposed on the here and now which the machines register in real time (a transmission without recording).

The second row is made up of loudspeakers and is placed at some distance from the screens, in a bright corridor that receives the sound of the museum.

The movement of incorporeal signs through the space also reflects the transformations that the contemporary art museum model itself has been undergoing. The machinery fragments it as dispersed and heterogeneous situations.

24 Frames is one of the results of the research project Desarrollos de sistemas interactivos para la generación y proyección de imagen-luz y sonido: revisión de su incidencia en arte público (HAR2017-87535-P-AR), funded by the State Research Agency, Ministry of Economy, Industry and Competitiveness and has been carried out at the Universitat Politècnica of València.

Biography of Laboratorio de Luz
Since 1990 Laboratorio de Luz is in the Faculty of Fine Arts of the Universitat Politècnica de València and has worked as a space for meeting, study and research of artistic and expressive elements related to light. At present, the members of the group belong to different departments and their participation depends on the project they are working on, combining the collective and the individual, university research and artistic activity, production of projects and dissemination of texts.