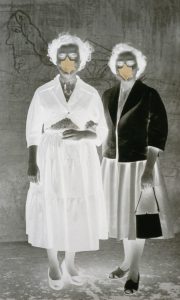 This work is part of a project made up by 6 photographs and 6 drawings, all of the same size. Overall, 12 works, as 12 are the months of the year. It is a joint project.

Each month, from each photographic work, projects a news item of a different genre: religious themes, the flight of the exiles, the darkness of a Spain with stereotypes, weddings, social issues, and gender. All these reflections are projected in these photographs of anonymous characters.

The drawings are made using the collage technique, depicting characters who tell us about their lives from different perspectives.

These 12 works were exhibited in the stand of the newspaper El Mundo in ARCO in 2005.

Both the photographs and the drawings give true account of the news, the daily life as it emerges in the newspapers or on television. It is life itself; they are current news.

From the 6 pictures that make up the project, I have chosen the picture entitled “You did whatever you want with me”, 2005.

This picture depicts two anonymous women photographed against the wall. A wall with image graffiti (probably the profile of a woman).

Taking the photograph to the negative is not a matter of tragedy. It is the interaction between light and shadow that both in the drawing and, in this case, the photograph, tell us about a moment or situation of density.

The darkness in the background of the photograph makes the women’s dresses stand out. Hair does not exist, it is white, they have had it trimmed, they have been shaved (probably).

I was asked once what it meant to veil these women’s faces with a star.

I leave the rest to your wisdom.