ASPEN: THE MULTIMEDIA MAGAZINE IN A BOX 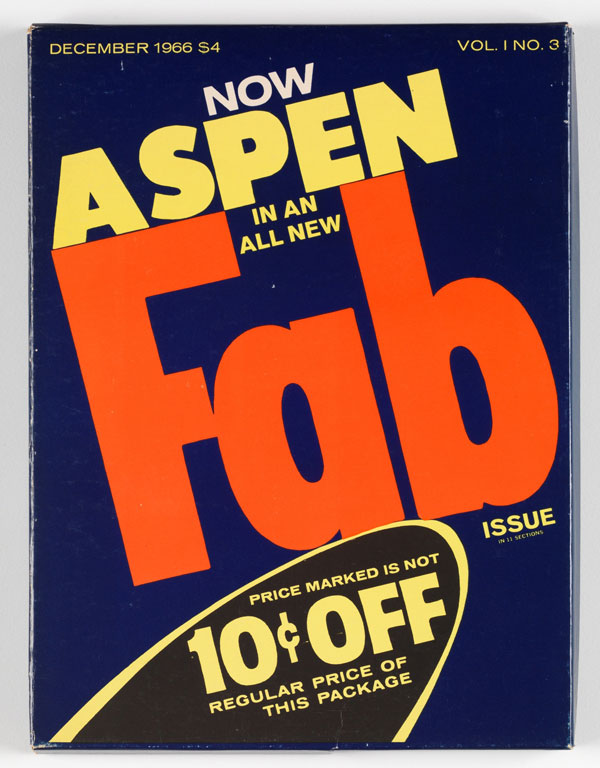 This magazine is first published in New York in 1965. It arises from the innovative idea of the publisher Phyllis Johnson, who proposed to certain artists to create a magazine bringing together culture and play. The ten issues published had the collaboration of artists such as John Cage, Andy Warhol, Merce Cunningham, Marcel Duchamp, Yoko Ono, Robert Rauschenberg and The Velvet Underground. Each issue was delivered to subscribers in a box and responded to a new and different project dedicated to a specific topic. All issues were made up of a wide variety of materials such as brochures, recordings, flexi discs, posters, postcards, news clippings, jigsaw puzzles, correspondence, and even a super-8 film. Aspen is considered to be an emblematic work of experimental art and an icon of avant-garde publications.

The Times of Upheaval exhibition shows the mythical box number 3 known with the title The Pop Art Issue. It was designed by Andy Warhol and David Dalton and published in December 1966 by Roaring Fork Press, NYC.

IVAM recently bought the ten issues that make it up and keeps them in its library.