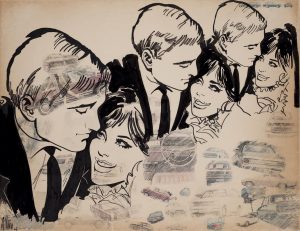 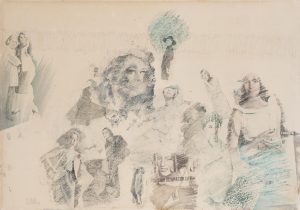 Ana Peters was one of the few women who were part to the artist groups that, as Estampa Popular and Crónica de la Realidad did, led the criticism of Francoist ideology in València in the 1960s from the premises of pop art.

In 1966 he presented his project Images of women in the consumer society, at the Edurne Gallery in Madrid, with the aim of denouncing the mass media as control and planning instruments. The show business and the advertising maelstrom displayed women either as a homogeneous, passive and beauty-focused being; or as an image-stimulus to encourage the consumption of male products. Both scenarios were reflected in a series of collages, designed by Peters for this exhibition, in which she transferred images to the canvas, appropriated comic strips, reiterated motifs and rhythmically divided the space. Her main subjects were, at times, ready-to-wear fashion show top models, from Spanish magazines like Telva and Ama and international magazines such as Vogue and Elle, as well as their gestures, poses and expressions, always repetitive and used to define behavioural models and consumption habits for femininity. In other cases, the central figures were cars, symbols of maleness and virility, and feminine characters, whose charms and sensuality were used as advertising claims.

While some other artists, such as Joan Rabascall and Equipo Realidad, linked the manipulation of the image of women to the process of Marxist alienation, Peters was one of the first artists in Spain to link it to the construction of gender roles as part of a social engineering process. She and other female artists of her generation represented the link between those who built the image of the modern and independent woman who was born in the years of the Second Spanish Republic and those who made claiming discourses to fight discrimination against women during the Spanish transition to democracy.