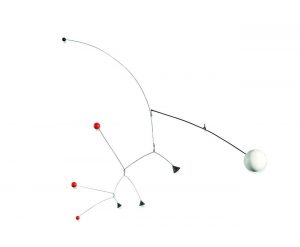 “(…) the various objects of the universe may be constant, at times, but their reciprocal relationships always vary”. Alexander Calder

Calder is one of the most influential artists of the 20th century. He started by creating small pieces made of wood and wire that he twisted and flexed, drawing with it small three-dimensional figures inspired by the world of the circus. These figures were gradually simplified and abstracted while they were given movement to gain dynamism. This is how, in the 1930s, his first mobiles emerged: sculptures formed by abstract and organic pieces of wood or metal and suspended in the air that swing in a smooth, harmonious and almost hypnotic and imperceptible way. The changing shadows and lights, together with the slight sound generated by the figures colliding with each other, make the ensemble change its shape to continuously generate infinite shapes.