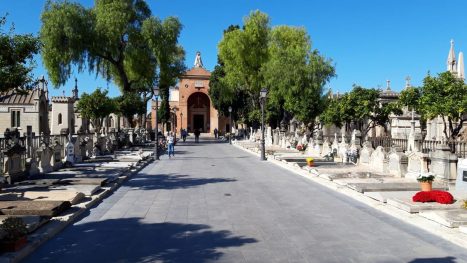 “Transmaricabibollo” route through the Valencia General Cemetery, with Piro Subrat

On this route we will visit the General Cemetery of Valencia, visiting the graves of sexual and gender dissidents who have been relevant in local and state history: the city’s LGTB activists, writers, transvestites from the first nightlife scenes, anarchist and communist militants who played an important role in the Republic, Francoism and the Transition… A journey through the entire 20th century and the beginning of this century.

During the tour – which lasts a maximum of 2 hours, we will stop at each of the ten or so tombs on the visit – we will be able to observe other aspects of the cemetery; its art, the consecutive architectural extensions, the social class of its inhabitants, or the mass graves of people who were repressed in the post-war period.

Piro Subrat (Alcalá de Henares, 1990) tries to dedicate himself to historiography outside the academy and has been involved for years in transmaricabibollo activism and anti-capitalist movements. The symbiosis between these themes led him to write Invertidos y Romepatrias. Marxism, anarchism, and sexual and gender disobedience in the Spanish state 1868-1982, and he also collaborates with other works and journals. His work in the alternative publishing field has resulted in dozens of fanzines with Distribuidora Peligrosidad Social, and he is currently part of Editorial Imperdible. For years he has been living in the neighbourhood of Cabanyal.