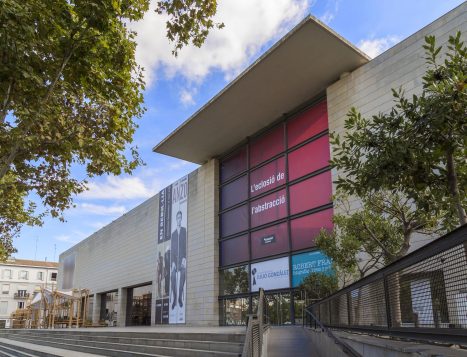 The IVAM has incorporated a new line of artistic activity focusing on specific proposals by various artists which reinforce the museum’s programme of exhibitions by activating areas that have been considered merely functional. One of the frameworks for these interventions of The IVAM Produces is the museum’s facade, which will offer a series of large images conceived and created specifically to reflect on the role of art in our society.

“A strange body” of Marina Núñez is a trompe l’oeil in which the IVAM’s facade breaks violently because a woman hits it. Even more unbelievable is that this woman is not hard or consistent, but soft and malleable. In fact, the collision force causes that her flesh spills into multiple splashes revealing her fluent nature. So that the rigid matter becomes much more fragile, and it is unable to contain the soft flesh avalanche.

This woman’s body is really strange, unusual for its extreme ductility, exceptional for the forms that it adopts, astonishing for its resistance. However, in medicine, “a foreign body” refers to an external element that enters into the body and can damage it. At the beginning it is important to get it out, although sometimes it is expelled spontaneously.

I do not know if the woman is uncomfortable for the building, which regurgitates it. Or if someone has considered that this place did not belong to her, and it removes throwing her against the wall like a woman bullet. Or if she is who feels that she is surrounded by such a hostile environment, or simply inert, and she is forced to escape.

I tend to think that what we see is the result of his own impulse. That has been thrown into our space, which is from spectators, to conform again, probably somehow unexpected, or simply to be spread out.