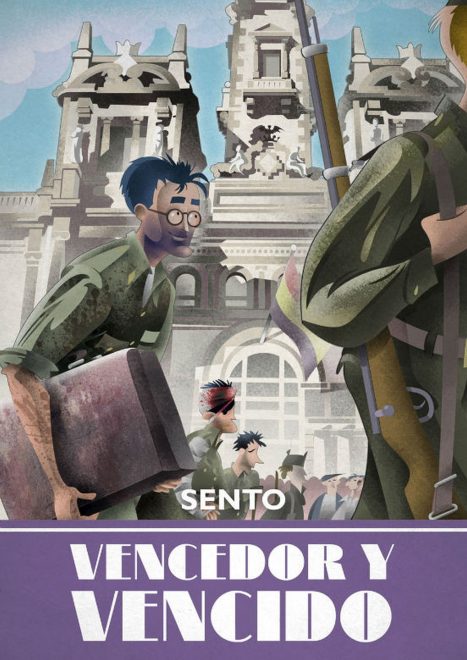 Presentation of the book “Vendedor y vencido” of Sento Llobell

On the occasion of the exhibition “VLC. Valencia a clear line “Sento Llobell presents his book” Vencedor y vencido”.

He got a degree in Fine Arts in Valencia,and after that he started working as an anatomy professor in the same college from 1979 to 1981, in this year he stopped teaching for fully dedicating to drawing comics.

He was labelled as a member of the so called ‘Nueva Escuela Valenciana’ (New Valencian School) in the 80s, inside the ‘clear line’ movement.

He has published titles as ‘Romance’, El Laboratorio del Dr Arnau’, ‘Ruinas’, ‘Cazando Millonarios’ y ‘El cartero audaz’ both written and drawn by himself. He also collaborated with writers as Ramón de España in ‘Velvet Nights’, and the novelist Jaume Fuster in the series ‘Tirant Lo Blach’.

He has got a vast book on advertisement illustration. Over time, the presence of the three dimensions becomes more frequent in his work. He has designed avant-garde fallas as the ones of the City Hall square in Valencia (1986 and 1987), or the ones in Na Jordana square ( 2005 and 2011), and the walkable giant figure of Gulliver in the dried Turia riverbed, in this city as well. Other examples of his three dimension aesthetic are caricatures, paper crafts, published in the magazine ‘El Jueves’.

Since 1981, he has edited 12 comic books, he has also illustrated 6 books and has designed 25 posters. His illustrations and comics have been published in many media as “Bésame Mucho”, “El Víbora”,” Cairo”, “Madriz” ,” TBO”,”Pequeño País”, “El Temps”, “El Independiente”, “EFE EME” or “El Jueves”.

Nowadays he lives in Sagunto ( Valencia), and he still draws comics. He has begun to teach again postgraduate courses in The Fine Arts College of Valencia and monographic courses in ESAT, in the same city.