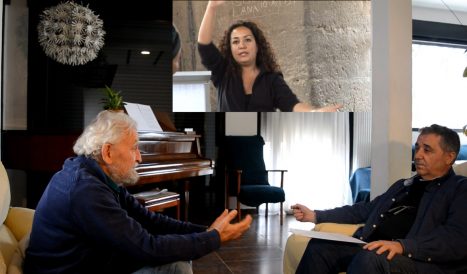 The showing of the documentary Llorenç Barber & Monserrat Palacios – Outsider of Sound will be attended by the artists and will offer a 62-minute preview of the documentary, which has been made by art historian and critic Joan J. Soler Navarro for the magazine and channel Sinergias.

During the 240 minutes, the documentary goes through the career and delves into the artistic importance of Llorenç Barber. Robert Ahsley said about the musician in 1991 that he was “the most brilliant composer of today’s young Spanish generation. When it rings the bells, it is one of the most important experiences of new music recently heard in Europe”. In the documentary, Llorenç Barber talks to us, as the main protagonist, about the birth of sound art in Spain from the influences of John Cage and Stokhausen, and its spread with his friend and contemporary Juan Hidaldo (ZAJ) Fluxus.

The film also reveals why they both chose the bell as an instrument of artistic expression and discusses some of the 400 concerts given on five continents. He has sometimes directed (or coordinated) 200 people in each musical intervention, composed by Llorenç Barber, together with the sound artist Montserrat Palacios, the composer’s wife.