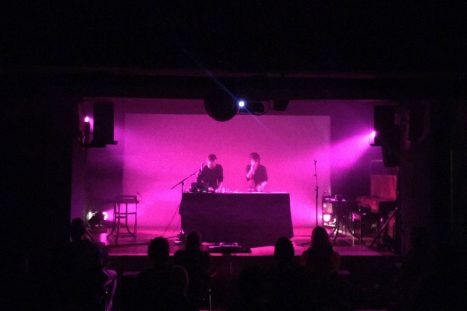 Both pieces explore moments of subjective and collective disobedience, not through speech, but through aesthetic materiality of some audios and some texts. Negro (Negro Live set) talks about desire as a driving force from poems with luxurious language, snippets of a political manifesto with the form of a poem, putting videoclips into words and extreme lyrical loops; while Rossa (RSRJ RJRS) akes binary classifications of gender and identity to the extreme to dissolve them and rave about them using a combinatorial analysis (Gertrude Stein and Steve Reich).

To finish, a lullaby composed from the one that Lorca and La Argentinita recorded in 1931, invites us and alerts us to the dangers offered by the world after sleep, saving the power of encouragement and re-enchantment that this type of songs have by definition. Outside of the pre-recorded meanings and the tones homogenized by the discourse about order, a listening experience opens up in the body. Desire + Dissolution + Re-enchantment > an imagination.

María Salgado (1984) and Fran MM Cabeza de Vaca (1976) have worked together in Madrid since 2012, drawing from an idea of audio text as an intersection between poetry, language, sound art, music and performance. The area of research, entitled Hacía un ruido (Towards a noise) (2012-2016), which focused on the cycle of political disobedience of 2011, resulted in graphic self-published posters and pamphlets, a book, a CD, an instrumental ensemble piece, an audio installation that lasted for two months, and a hybrid recital that toured around various spaces and contexts in places like Madrid, New York, Barcelona and Guadalajara (Mexico). Jinete Último Reino (2017-en curso),(2017 – ongoing), the research area in which they are currently immersed, looks at sexual and gender dissent. It originates from an instrumental piece whose score was published in the Present Tense Pamphlets In relation to this area of research, they have also produced a sound piece for the Reina Sofia Radio, posters (Manifiesto, 2018), scores, and two 60-minute performance pieces: Frag. 3 y Frag. 2, which premiered in Matadero (Madrid, 2017) and at the MACBA (Barcelona, 2019) respectively. Both have toured, and continue to tour, various theatres, museums and festivals. They recently produced Frag. 1 of the trilogy, a work that premiered in November 2021 in the Sala Negra (Black Hall) at the Teatros del Canal theatre, within the Autumn Festival. Around this, they have produced an audio-visual piece entitled ‘Nana de esta pequeña era’ (This little era lullaby), commissioned by Pedro G. Romero for the Bergen Assembly (Norway, 2020), exhibited as an installation at the WKV Stuttgart (Politics of life, 2020), and the octophonic installation, ‘A la poesía la llama lengua a la lengua la llama continuidad…’ (Poetry is called language, language is called continuity), recently exhibited within the Komunikazio-inkomunikazio at Tabakalera (Donostia, 2021).