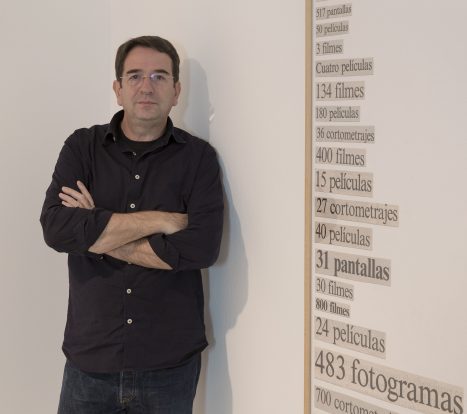 Ignasi Aballí began his career as a conceptual artist during the 1990s, when he set aside the medium of painting and mimetic representation and gradually became involved in the development of conceptual reflections that concentrated first on painting as a theme and then on the archive techniques proposed by Michel Foucault. He also carried out projects of other kinds, more closely connected with fiction, the imagination and films. A good example of this is his series Desapariciones (Disappearances), formulated around Georges Perec’s similarly titled novel La Disparition (A Void), 1969, which was written with words that do not contain the letter “e”. Aballí has said that he shared that writer’s fascination with “background noise […] something that we never perceive but that proves to be very interesting and complex when we pay attention to it”. Desapariciones, which is the subject of this show, consists of twenty-three posters that advertise films whose screenplays were written by Perec, although some never reached the big screen. Thus, not only will these posters lead us to discover new absences, putting into practice Duchamp’s idea of the memory of the presence of something absent, but they will also make us reflect on the production of images in our society. This series will be accompanied by other pieces that are connected with the theme of the cinema in Ignasi Aballí’s work.