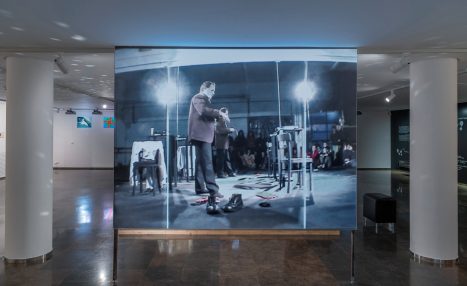 Target audience: Artists, art students and anyone inspired by the figure of Miguel Benlloch.

Mal de eww is a verbal remix and textual genesis workshop based on the manipulation of voice, utterances, and social roles from the exhibition Ensayos sobre lo cutre [Essays on Seediness]. Moving from the verbal productions of the Miguel Benlloch archive to the sonorous and performative landscape that surrounded the artist in Granada in the eighties, from the reception of vocal enunciations and distortions to writing, the workshop explores the semiosis of the linguistic-performative instances that construct social selves and their perspectivisms. From the phrase, with its subsequent turns and answers, “Can each one fit in many?” Mal de eww recovers and revolves the drag king-queen-prince/ss technique to the whole cultural interplay of verbal arts.

The workshop encourages us to think and practice a type of writing in which the grammatical signs and their motifs are not fixed positions, nor are they exactly parody, but rather bewilderment and uncertainty. And also, to manipulate the referential nature of the pact of consensual assignment of social value and prestige. The liminality of the medium. By putting into operation, the different possibilities of inhabiting from one’s own voice another self – from the machine, the paper, a self that used to be of the body – where does the built-in speculation of social stereotypes and their modes of entrenchment in violence or resistance lead? The laterality with which the forms and themes used to generate an identity are manipulated, as well as their numerical deviations, maybe, slide the different configurations of the trendy towards an improbable continuity, working on its visible fissures, maybe, generating a place for the words to inhabit the doubt.

Tacoderaya are Jonás de Murias and Paula Pérez-Rodríguez. It is a collective of voices and sounds selection, of oral and rhythmic remixing, of generation of verb-sensory experiences. They have been residents of PhotoEspaña 2015, and performed at institutions such as CA2M, Sala de Arte Joven, Matadero Madrid or Conde Duque. Among them, HAY UNA PELEA E IMPORTA QUE PASE (THERE IS A FIGHT AND IT MATTERS THAT IT HAPPENS), (2015), a speech action around the traces of egos in any group taxonomy and their relationship with violence; titula este truste ánimo yop uwu (This sad mood is entitled yop uwu) (2020), which places it against the dispersion of the ego and the search for remains of attentional-capitalist experiences; or 1 ola majestic en mi balconee ( majestic wave on my balcony), the collective’s first video piece, which focuses on the landscapes of tourism as a link between the climate catastrophe and leisure, produced by L’Internationale Online (2021) and a program at the Fanzine Fest de Berlín (2021).