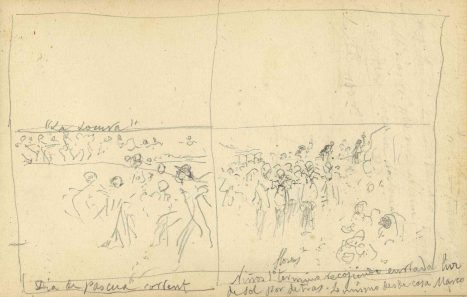 The lecture will present theoretical interpretations of Ignacio Pinazo’s representations of human groups in public spaces. The main lines of the exhibition will be presented and a selection of the works in the exhibition will be analyzed, together with biographical components and reflections by the artist. A reading of this group of works by Pinazo in a biopolitical key will be proposedTo this end, it is necessary to take into account their strategies of representation, the linkages and misalignments of such strategies with respect to personal and collective experiences, as well as their specific ways of manifesting the play between ideals and conflicts in the integration of the social body through the habits and customs of the multitudes and of their own body in the encounter with the bodies of others.

Vicente Pla Vivas. Sagunt, 1962. Professor of the Department of Art History at the Universitat de València, specialized in the problems generated by the images during the historical processes of establishment of modernity, in the study and interpretation of the European graphic image of wide diffusion during the nineteenth century, as well as the Valencian art of the final decades of the nineteenth century and the beginning of the twentieth century and photography. The research can be framed within the theoretical field of visual studies and has proposed to open ways of connection with the history of aesthetics, technique and scientific epistemologies, as well as cultural studies, to reconstruct the active structures in the functioning and evolution of the mechanisms of modern imaginaries. He participates in the R+D+i Project «La vida artística en Valencia (1880-1936). Fuentes para un diccionario de artistas». (HAR2009-14480). In 2010 he published the book La ilustración gráfica del siglo XIX. Funciones y disfunciones. He participates in ASCIGE (Atelier sour le Satirique, la Caricature et l’Illustration Graphique en Espagne), in the International Festival Incubarte 6 and 7 and in Perifèries 13. He is active as a contemporary art critic with publications on Artur Heras, Sebastià Miralles, Manuel Bellver, José Guerrero Tonda, María José Pérez Vicente and XL Family among others. He gives lectures on 19th and 20th century art and curates the exhibitions Juan Cuéllar. Distopia, at the center La Nau de la Universitat de València and at the Centre Internacional de Gandia 2018, and in El Món rural com a espai polític en l’art valencià (1830-1930) at the Casa-Museu Benlliure in Valencia, 2020. Since 2021 he co-directs the Arxiu Valencià del Disseny.