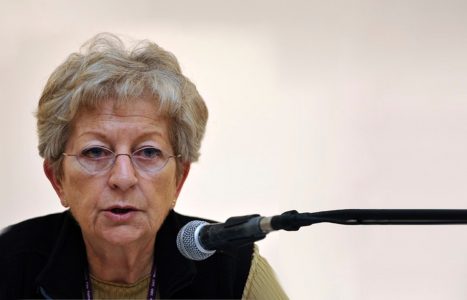 Lecture Image and figure, the body and the sexual

Teresa de Lauretis was born and educated in Italy. Shortly after completing her doctorate in Modern Languages and Literatures at Bocconi University in Milan, she relocated in the United States and held academic positions at the Universities of Colorado, California and Wisconsin, where she taught Italian language and literature, semiotics, feminist studies, and film studies. In 1985 she was appointed Professor of the History of Consciousness at the University of California, Santa Cruz. She also held visiting professorships in Canada, The Netherlands, Germany, Italy, Spain, Chile, and Argentina, as well as the United States. Among many other awards, she received doctorates honoris causa from the University of Lund (Sweden) and the Universidad Nacional de Córdoba (Argentina). Since her retirement in 2008 as Distinguished Professor Emerita of the History of Consciousness, de Lauretis has continued to lecture and hold Seminars internationally. In the summer semester 2017 she was Visiting Professorship at the Freie Universität–Berlin.

De Lauretis is the author of ten books, including Alice Doesn’t, Technologies of Gender, The Practice of Love, Figures of Resistance, Freud’s Drive, and more than one hundred essays originally written in English or Italian. She edited or co-edited three volumes of essays and two journal special issues, including the “Queer Theory” issue of differences. Anthologies of her works are published in French, Spanish, Italian, and Finnish, and her writings have been translated into 14 other languages. A symposium on her work was held at Swarthmore College on November 5-7, 2015. She is currently working toward a theory of reading and spectatorship based on figurality and the psychoanalytic concepts of transference and translation. In progress: “The Sum of All Her Yesterdays,” a reading of Djuna Barnes’s The Antiphon.