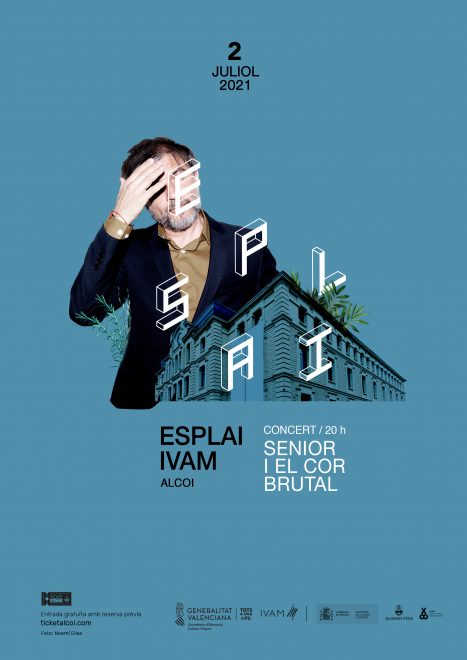 The second edition of the cycle Esplai IVAM moves to the headquarters of IVAM Alcoi, to present two outdoor concerts on Friday June 25 and July 2.

This cycle tries to show current musical proposals and introduce new languages to the museum through the experimental proposal of the artist Clara Peya, who combines the classical piano with electronic synthesizers, and the Valencian folk of the group Senior i el Cor Brutal, which does it with sounds of wood, keys and strings, following the tradition of North American folk-rock.

Pianist and composer, Clara Peya is considered one of the most original and unique creators that have emerged in recent times in the music scene of the country. A frenetic biography that moves between music, theater and activism.

Musically, Clara Peya is unclassifiable: she moves between chamber music, jazz, pop and electronic music, keeping the piano as her center of gravity. She is energy and feeling in its purest state, and in this concert we will be able to see her alone at the piano playing with the keys and synthesizers, to generate that unique and unclassifiable atmosphere.

Landete (Senior) started this musical project in 2007 and, from the beginning, he was joined by the musicians of the multifaceted Cor Brutal. In his style are recognizable influences of alternative country and American folk with songs in Valencian language. For this reason, and as they say, they make compositions “in the Valencian style, that is to say, American music, but from Valencia”. Throughout their career they have published the following works:

La experiencia gratificant (2009), Gran (2011), València, California (2013), El poder del voler (2014) and Valenciana Vol. 1 (2017).
In duo formation, the public will be able to enjoy a review of the more than 10 years of the band’s career with sounds of wood, keys and strings. According to Senior, “it’s about going to the roots to make the songs talk one-on-one with the listener and, in this way, increase the interaction in an intimate and direct way”. Thus, they will exhibit a more European and less Yankee sensibility, in the style of “Ute Lemper, Kurt Weill or Edith Piaf”, adds the singer.