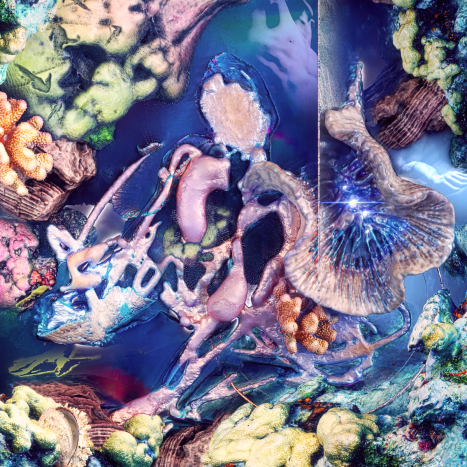 From their research for the Programa d’Art i Context on speculative evolution and narrative fiction concepts, Diego Navarro and Dario Alva have created a collaboration with philosopher, dancer and choreographer Miguel Ballarín. This is a choreography and conversational proposal which provides the opportunity to expand on, study, and analyze certain aspects of Navarro and Alva’s research with the audience.

Coral, ‘un fómite’ has arisen from a synthesis of earlier collaborative processes between the three artists with artworks such as Cenotafio, on display at the Canal and Madrid Theatres in 2018, or Inventario, in development since 2019. In this case, the piece focuses on the development of a choreography language related to movement sonorities and languages known as “coral”: those which, according to Ballarín’s definition, are “exercises in caring for the body itself”, which are found “in technique as something similar to a home”, and which enable us to “accept ourselves while accepting this place”. The presentation has come from a concentrated sample in time of choreography elements, surrounded by sound and visual resources for the purpose of creating an atmosphere or a feeling of “place” in the audience, and in relation Navarro and Alva’s project aims to create immersion experiences in fictional environments. Once the piece has finished, there will be an opportunity for dialogue with the spectators and there will be an exchange of ideas and impressions on certain concepts that arise during the piece, with the help of texts and small visual artefacts (similar to picture cards) which will be distributed throughout the audience.

Miguel Ballarín (Madrid, 1993). Philosopher, dancer and researcher in contemporary body art. He works between the spheres of theoretical criticism, choreography practice, and poetic creation. Obtaining a doctorate with the project “Body and crisis: a criticism of the romantic time” under the supervision of José Manuel Cuesta Abad at the Department of Philosophy at the Autonomous University of Madrid. Member of the Complutense Seminary of Research on Dance History and Theory. Founder of the contemporary urban dance company Co-IApso, he has led artistic residency programs in national centers including Naves Matadero, Conde Duque as well as the Canal and international theatres such as B.Motion Festival 2018 (Venice) and Tanzkongress 2019 (Dresden). As a performer and poet, he works with Arca (Sonar Festival 2019) and incorporates the multidisciplinary group of experimental digital performing arts, Mitrilo, alongside artists such as Sergio Razorade, Valeria Baret and Sevi Iko Domochevsky. Dance and Urban Music Teacher at the María Dolores Pradera Municipal School, Madrid, he coordinated and redrafted the textbook Historia de la Danza III: Danzas Urbanas (Mahali publishing house). Among his most recent publications, it is worth mentioning A Cataphoric Withness, along with Victor Aguado, as part of Party Studies Vol.1 (Errant Bodies Press, Berlin) and Ocupares: desestar un mal como (“The names of fear” seminar, Matadero Madrid), a choreojuridic critique of the Desokupa business practices.