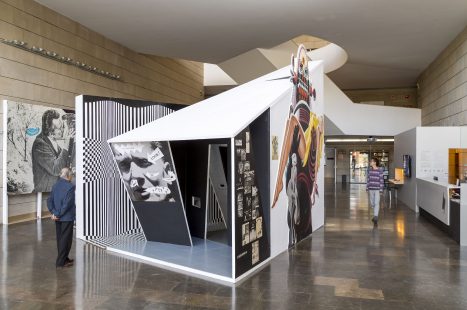 Case studies are projects that link the exhibition to the research, documentation and analysis of the work of artists of the 20th century.

From a selection of works that are preserved in the permanent collection of the IVAM, this case study presents a tour of the work of Richard Hamilton (London 1922 – 2011) who, along with other artists, was largely responsible for developments that transformed the British art scene during the 1950s and 1960s. His seminal role in the birth of pop art has been acknowledged and celebrated through retrospective exhibitions in the most important museums in Europe and the United States.

The exhibition will show the incisive speech and multifaceted work of Richard Hamilton. With a playful and ironic character, he poses a critical reflection on the consumer society and the contemporary media imagery. The selected works, mainly graphic works, along with the catalogues that the Library of IVAM preserves, and which Hamilton always looked thoroughly as far as design and content were concerned, are the axes of this presentation that explores the boundaries between popular and high culture, natural and artificial, figurative and abstract.