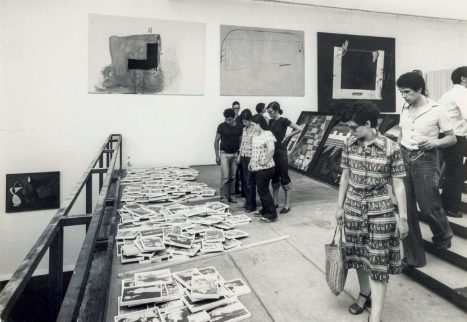 Conversation between Tomás Llorens and Sergio Rubira on the occasion of the exhibition “1936–1976 Spain. Artistic avant-garde and social reality”

Conversation between Tomás Llorens and Sergio Rubira on the occasion of the exhibition “1936–1976 Spain. Artistic avant-garde and social reality”.

18 July 1976, coinciding with the fortieth anniversary of the coup d’état that marked the beginning of the Civil War, the exhibition Spain. Artistic Avant-Garde and Social Reality. 1936–1976 was inaugurated in the International Pavilion in the gardens of the Biennale di Venezia. On that occasion the Spanish Pavilion remained closed, although Spain was fundamentally present as a result of that exhibition organised outside the Spanish institutions by a group of artists and intellectuals who were strongly committed politically. They included Valeriano Bozal and Tomàs Llorens, who acted as curators, and the artists Eduardo Arroyo, Alberto Corazón, Equipo Crónica, Antonio Saura and Antoni Tàpies, who were involved in the development of the entire process and whose works formed part of the exhibition. Both the evolution of the project and its results were very controversial and led to confrontations between various groups of artists and critics.

As Llorens explained, the aim of Spain. Artistic Avant-Garde and Social Reality. 1936–1976 was “to make it clear how Spanish avant-garde art has been modelled, in its internal constitution, often with ambiguous characteristics, on the dialectic process of political struggle and, at a much deeper level, of class struggle in Spanish society”. The exhibition constructed a new account of the history of the art of the Spanish State during those four decades, and in a way it has determined the account that is still accepted now.

In view of the part played by Tomàs Llorens and various Valencian artists in the development of Spain. Artistic Avant-Garde and Social Reality. 1936–1976, it is not surprising that the IVAM Collection contains nearly forty of the works that were included in the Biennale di Venezia in 1976, according to the list that appeared in its catalogue. The aim of this show, which forms part of the series of Case Studies, is to contextualise this group of works through a reappraisal of an exhibition that has become fundamental for understanding the art produced in Spain in the last century.